I’ve been routinely checking the markets for potential set ups and saw this on the Daily chart which looked like a set up was potentially building to get short on Gold. It looked like price was also running into a cluster of resistance which meant that any trade could well not work out, moving higher and hitting a stop. 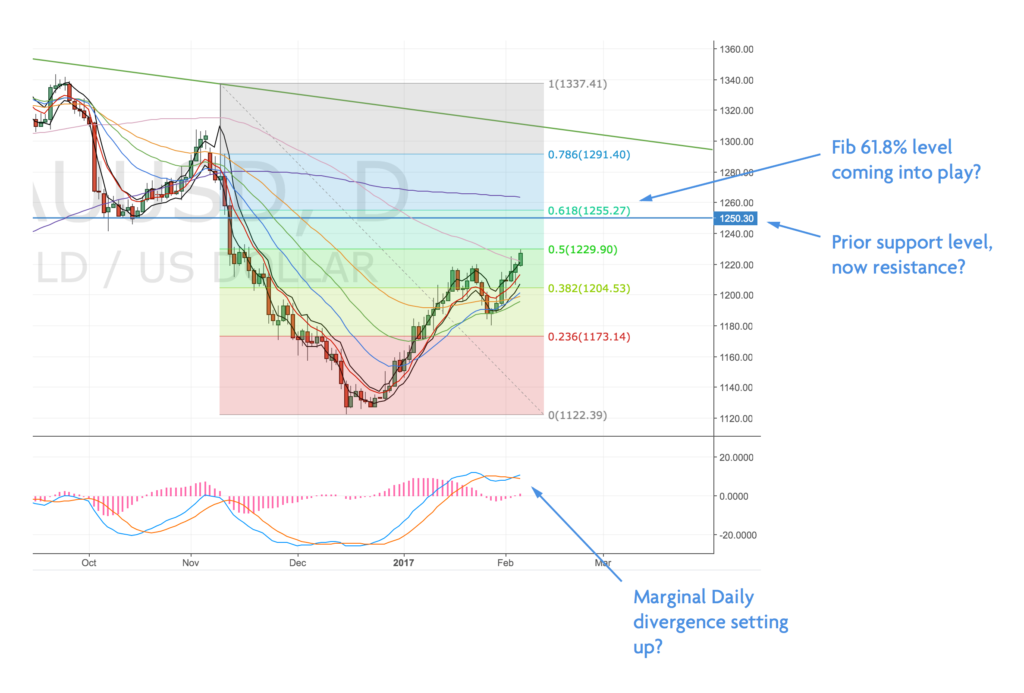 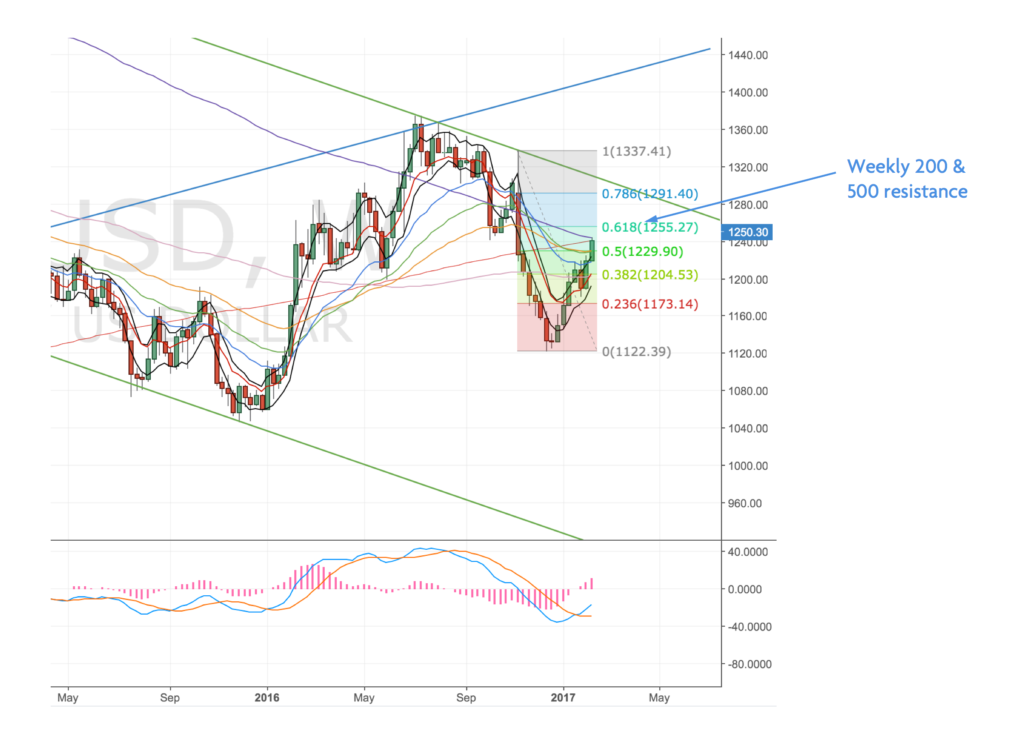 The Daily set up didn’t materialise – price went higher – but it did develop on the 4H chart.

When I checked this chart (a couple of days later), price had already closed inside the bands and moved higher so I had a nice level to get short with a marginal divergence. 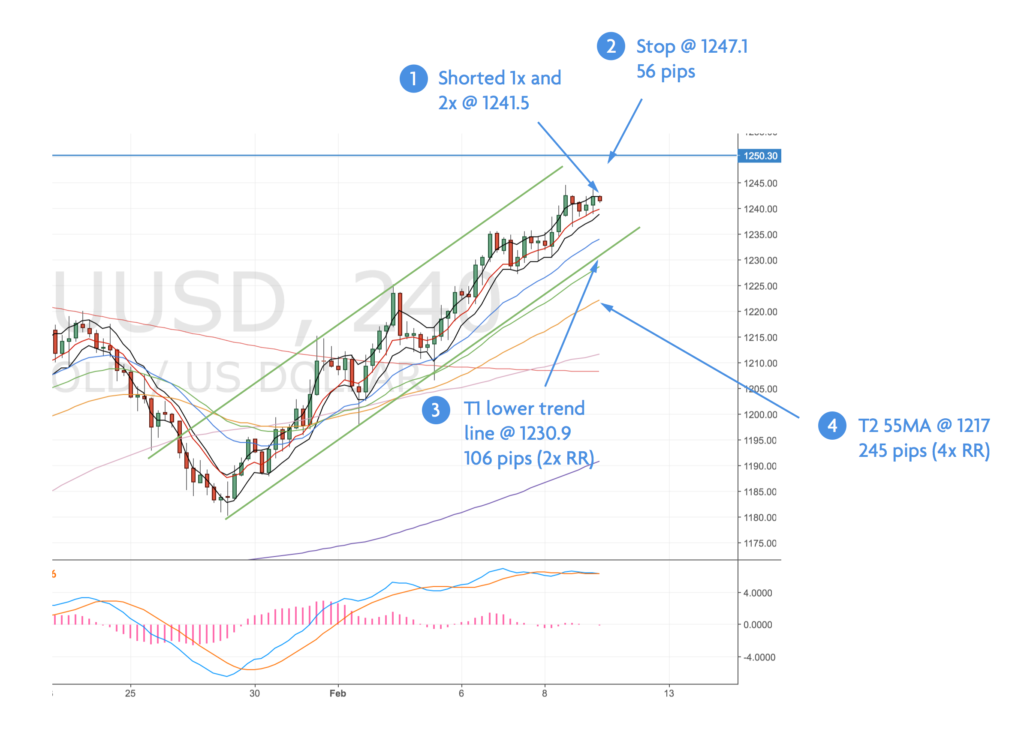 Gold 4H Chart – 9 Feb. A marginal divergence has set up.

I doubt this trade will work out given:

For now, the trade is on. Short @ 1241.5. Two positions: one small, one medium. My plan is to run the small position to the trend line (near the 21MA) and the bigger position to the 55MA, which hasn’t been tested for a while. The idea with this is the first target will cover some of my risk if price doesn’t get down to the 55MA before moving higher.

Slight deviation from my normal approach but the trend channel is pretty clear and makes for a good target as it’s slightly further than the 21MA.

Price broke down almost straight after I placed the trade. Very lucky with the timing!

My first target got hit pretty quick. Now running the rest to the 55MA. 56 pips banked, albeit at a tiny position.

My second target was hit early this morning. BUT, I wasn’t up in time to move my limit order higher (to track the 55MA) so I didn’t get filled! Ops. As the market has already tested the MA I just closed my position when I got to work. 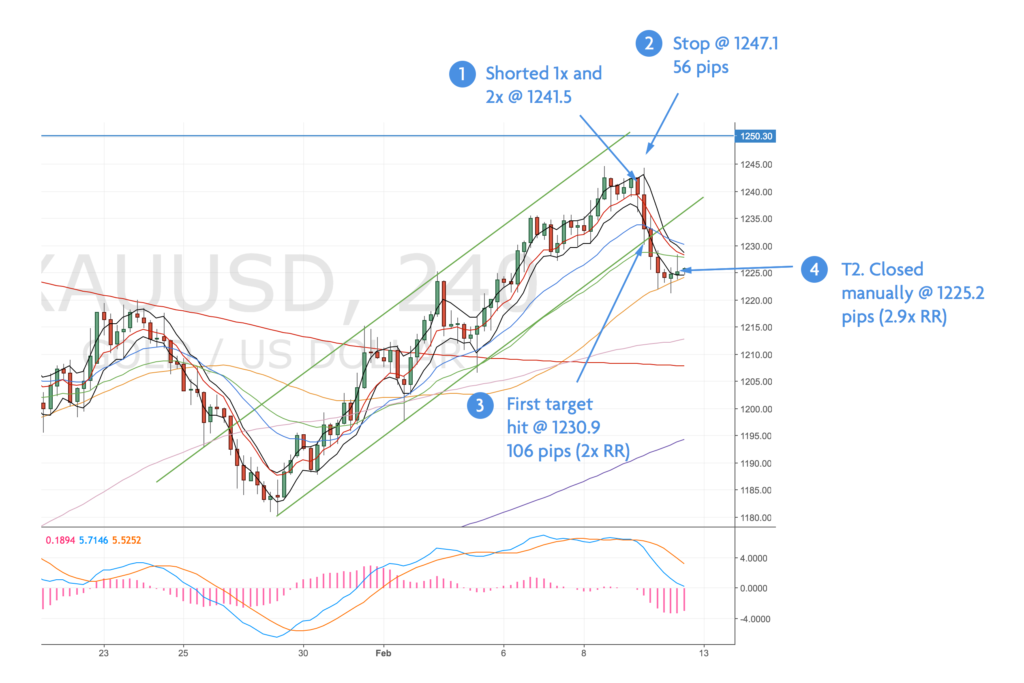 Final Gold 4H Chart – 9 Feb. Not the best execution but an OK trade.

The good thing is, I didn’t get stressed and rush about to close my position. I kept it together 🙂 It’s another lesson learnt, set alerts ahead of your targets when you’re not going to be around. I wonder how I would’ve been following a string of losing trades? (Would probably need to upgrade that gif!)

What was good about this trade was the better entry allowed me to up the position size without risking more money. So I’m happy enough with the trade.